A Most Uplifting Experience

Especially if you are a King Edward!

After a weekend away, overtime at work and rain it was great to finally get down the farm, and it's nice to write another post.

I'd been a bit worried about the spuds, I had a nasty feeling the slugs and worms were going to get to them long before I did if I didn't lift them soon. They had been left in a bit longer than originally planned as they weren't very big, but the above excuses meant they were coming out a bit later than we'd like

When I got there some nice critter had started the job for me, the middle of the row wasn't the ideal starting point, but every little helps. Pity he didn't do the weeding while he was there. It didn't take long to lift them, a lot were dug out by hand so not so many 'forked' casualties this time around. 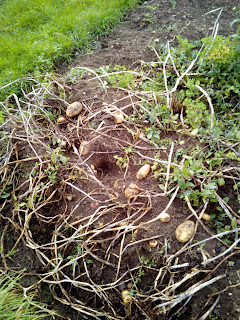 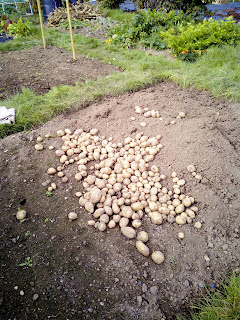 Not a bad crop in the end. I bought some small sacks on Amazon (see below) so I could distribute some to the family etc, and still have half a sack in the garage for lots of lovely Sunday roasts!..

Elsewhere the shutdown is in full swing. All the beans are down, the sweetcorn are gone, the  squashes are down to the last 6 courgette plants, (which just won't stop), it seems everything peaked pretty early this year. This looks to be the final haul pic of the year, another pumpkin for Halloween. 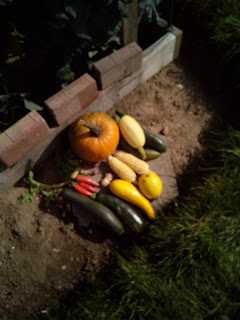 I've sieved out one of the compost bins which has been rotting down for a year now, it produced 2 full builders buckets of lovely fine compost, which I was tempted to keep for sowing next year, but instead I dug it into the bed for over wintering garlic/shallots and next years root crop, where the spuds came from. One bucket of sieved compost left about half a bucket of stuff to go back in the bin. That bed is tucked up for the winter now. 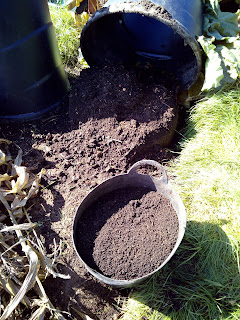 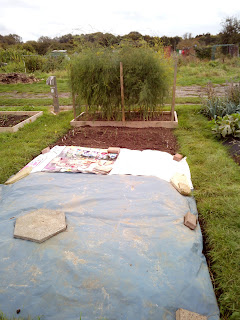 This is were the sweetcorn and squashes lived. Its been given a light digging over and a topping of horse manure from the local stables, my car valleter will not thank me for that, and covered over for the winter. Once those final courgettes come out I'll cover it completely. At the back the sprouts are doing nicely in the brassica cage. 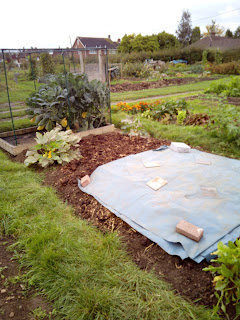 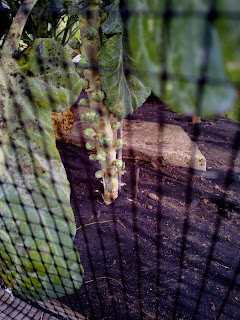 When the plants are removed from the beds it can leave leaves and all sorts on the ground , along with any hidden weeds etc, it can look a bit of a mess. A quick tip is to run the rake over it, it clears the fallen rubbish and pulls out some of the weeds for you too.

Three more beds to sort out now, as the pics show the grass is a bit out of hand too, the battery on the strimmer died and with all the rain its grown pretty quick. A new one is on order, I got a bigger one for 1/3 of the price of an original on eBay so it'll be sorted soon enough.

The picking and growing list have shrunk somewhat now. The courgette count will be over soon too, but I think we have a clear winner..

Our beans are definitely down - courtesy of the wind.

Fantastic ! You,ve done really well ! Would you like to try the Gete -okosomin Squash next year ..I should have some seeds to share soon :)

Fantastic potato crop guys, looks awesome - what variety are they?

These were King Edward, theyu do make a lovely roastie :O)

I'll be trying to keep a few back as seed spuds next year as I don't want to do as many so no point buying a whole bag.

They look interesting, bit more meat on them than the pumpkins we did. They did make a nice soup though!