I did make it down to the farm on a Saturday morning for a couple of hours when the weather was warmer to do a few general tasks but more of that later.

It is that time of year when things start popping through the letter box. This years seed order was a lot larger than the last couple of years but the seed tin did get a good clear out of the older seeds and things we've decided not to grow any more.

We ordered from DT Brown and Mr Fothergill's this year and this beautiful little lot is what has arrived. This shot includes the pumpkins on sticks and blue bosque tomatoes we got from www.growyoursecretgarden.com. 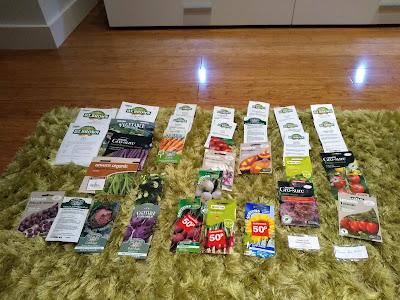 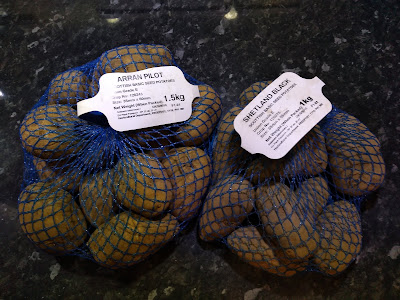 One reason to restrict the spuds to 2 varieties was to make space for Oca. Also known as New Zealand Yams and originating from South America They can be used cold in salads with a citrus taste or roasted like potatoes. They have less pest problems than potatoes and are expected to catch on in the UK. 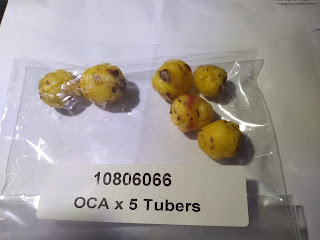 They aren't the cheapest thing to start off, 5 tubers for £7.99 but with some seed saving it should become cheaper. Excited to see how these turn out. As an added bonus the more observant may notice I got 6 instead of 5!.

Jobs wise, the compost bins have been moved to their permanent home. I put a thin strip of weed control fabric around the edges and between the bins leaving the bottom of them open to the soil and then used wood chips to hold it down. Should keep the weeds down and hopefully stop critters digging into the bin. 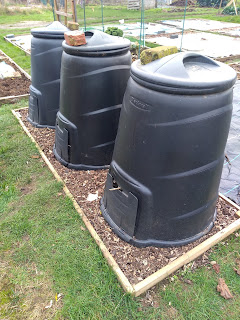 Last years asparagus stalks have been cut down and composted and the bed weeded. It might get a top soil top up before the season start. 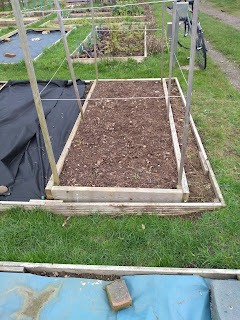 All the remaining carrots were dug up, none salvageable unfortunately and the ground dug over and the contents of the moved compost bins dug in ready for squashes and tomatoes. I might even put in a couple more bags of manure. 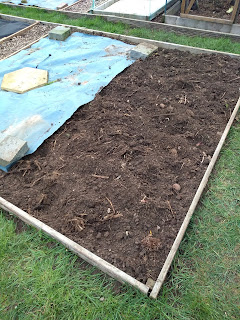 We haven't planted anything at all yet this year but in the next couple of weeks the onions and leeks will be started from seed... I really must get the cold frame built!

As some of you will remember, 2018 was not my year for parsnips, something I'm normally quite good with. In fact we have only two this year.

We popped down to check covers etc over the weekend and decided to dig up this fellow, one of the cleanest parsnips I've actually ever grown, at the moment he is destined to be soup. 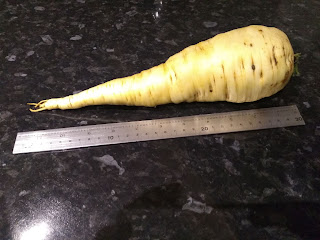 The Cape Gooseberries and Chillies have been killed off by the frost and once again the allium leaf miner struck and ruined what was once looking like a promising leek crop. That's 3 years in a row now I have had trouble with these pests.  I know a few fellow plot holders have also had issues, although it seems totally random who they hit.

"Plants can be protected by covering them with horticultural fleece, or an insect-proof mesh such as Ultra-Fine Enviromesh, at times when the adult flies are active and laying eggs (March to April and October to November). Crop rotation must be used, as adult flies might emerge from pupae underneath the covering if susceptible plants are grown in the same piece of ground in successive years."

I will be growing onions and leeks from seed this year and am unlikely to plant them out before May, so it appears that my best hope is cover any unharvested crops for Oct-Nov. Guess we'll give that a try.