I can't believe its been so long since I posted, but in all honesty with the season finishing so early, not a lot has actually happened on the farm.

We are determined to get everything closed down properly again this year as it makes the start of next season so much easier, even if it means clearing a few bits and pieces that aren't quite finished.

There won't be a lot of over wintering this year, leeks, parsnips, purple sprouting brocolli and sprouts that were planted this season will be providing the winter veg, while some garlic has gone in for next year, but that's about it.

I going to leave broads beans this winter and take my chances with the black fly and the bug gun next year. The wind caused so many loses this year I'm not sure its worth it, I may try again next winter if the crop is disappointing. I thought about over wintering some peas but our luck with those this year was so bad I decided against it.

Beds 1-4 have been cleared and covered, although 1 & 3 still need manure. I gave the beds a light digging over and weeding before a layer of manure was added and then covered with thick plastic. The manure wasn't dug in, I'll let the worms have that job. 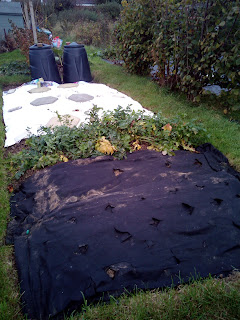 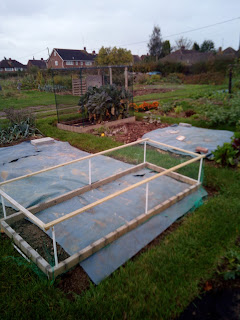 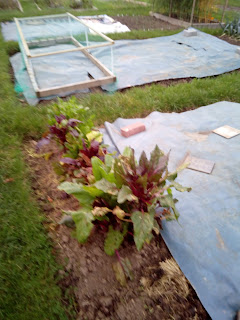 Last year I rotivated the whole plot but not this year for a couple of several reasons, number one, I want to preserve the structure of the soil, hence only a light dig, and number two, It really doesn't warrant the work, the soil is very easy to dig and a nice texture.

On the last visit I cleared the last courgette, (used for a nice lamb dish), which closes off our courgette leader board at a whopping 163. Zuchinni were the clear winner, even factoring in the extra plant, I suspect we now know why supermarkets only sell the green variety!

The last chillies were cleared and the remaining bolted beetroot and radishes composted. The cape gooseberries were removed, they were still growing new fruits but they'll never ripen at this time of year. I enjoyed these but it was the first time I've grown them, I'll grow them again, but and a bit more support and planning is needed for next years crop. 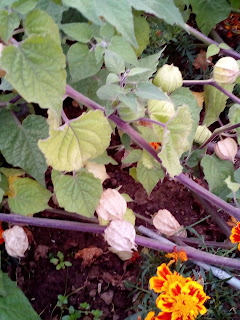 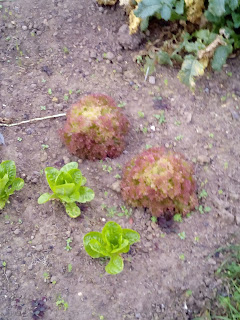 There were a few useful salads left, but we've had a frost since this pic was taken so I suspect I've lost those.

When I removed the marigolds quite a lot had gone to seed. I picked up all I could but I suspect there will be a magnificent self seeded crop next year.

There is still  a bit of work to get things completely closed down, manuring, grass cutting, clearing leaves etc round the raspberries and removing runners from strawberries again, but we should have it finished in another weekend visit.

Thoughts are already turning to next year and I'll be doing a review planning blog post in the near future, I'm sure everyone is already thinking about it too. Now where's that seed catalogue.

Finally, the pumpkins were put to good use for Halloween, I like a bit of pumpkin carving but there is a boot more satisfaction when you grew your own! 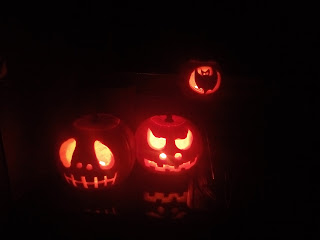 Our courgettes for some reason were useless this year. We always wait ‘til spring to sow broad beans and don’t usually have a black fly problem.