So now things are really starting to kick off. While activity on the plot remains at a fairly sedate pace thanks to the careful close down at the end of last year, at home the sowing frenzy is upon us.

The problem, is where to put it all. We don't have a greenhouse/poly tunnel so window sills and mini greenhouses it is. I'm going to build a cold frame for Heathers balcony from any spare decking I collected for the borders, I just need time to do it.

At Home
Getting through the back door to the garden is a bit of an obstacle course at the moment and in the spirit of recycling/repurposing I have commandeered the shoe rack as a tray holder. A genius idea I thought, it can hold up to 9 trays, points the plants at the light and has carrying handles, will be checking the dump and charity shops for more!! Closing the Kitchen blind has also become a bit of an issue. 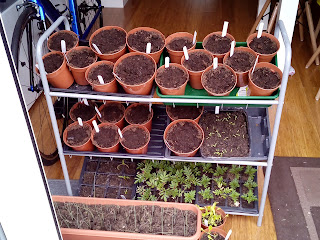 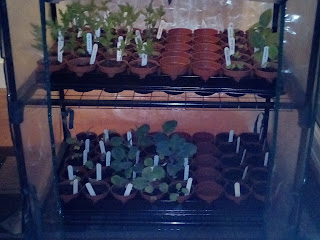 In the greenhouse Toms, which are due to be pricked out this week, Aubergines and Cape Gooseberry on the top shelf, Cucumbers, Broccoli, cabbages and sprouts beneath.
On the shoe rack  Marigolds, Beetroot, celery and various just sown squashes. Also the leeks transplanted to the long tub, progressing very slowly.
On the window sill (no pic) sweetcorn in pots, runner and climbing beans in tubes. The dwarf beans will go directly into the soil to save space. The first of the sweetcorn are up after only 6 days which is pretty impressive.

On the plot:
The asparagus is starting to crop , love the stuff, very tasty. Max 4 mins in salted, simmering water.

The radishes are half eaten (by me I should add) and we should shortly be less dependant on the Spanish for lettuce. Beetroot, spring onions and turnips are all starting to poke through. I planted out more home started lettuce today and yet another row of radishes. I'm determined to crack the continuous supply. They are sheltering in the cloche village I seem to have constructed, there is still  risk of an air frost or two where we are. 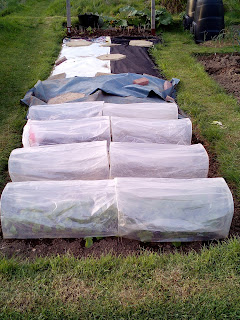 The carrots and parsnips are in. Parsnips under the cloche, I'm not taking any risk of them getting washed away this year as I plant them into compost and the carrots are protected by sticks, (thank you Sue), so hopefully whatever it is will stop having a bath in them . 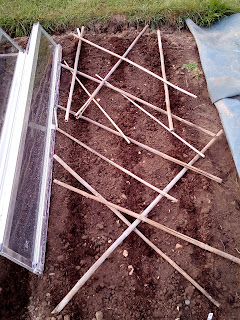 The first of the early spuds is just begging to be earthed up to. It might be frosty here Tuesday so I'll get to that shortly. There is also a more advanced one poking out of the compost bin, might be more fun to earth up that one! 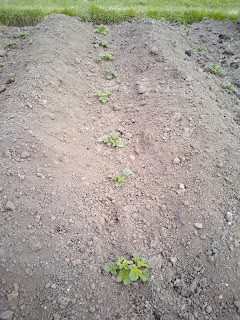 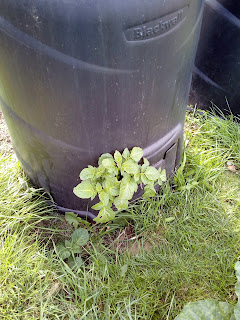 Elsewhere, the first row of Kelvedon Wonder Peas went in and I've started half a row each of spinach (Amazon) and Chard (Bright Lights)

The broads have also been mulched with grass cuttings and while there are lots of flowers there are no beans yet.

I'm happy with the progress so far but the to do list now still has plenty on it.

Hope you had a productive Easter, happy gardening folks!!
Posted by Dicky at Monday, April 17, 2017

Carrots and parsnips are next on the agenda for us. We struggle at thIs time of year and we have a large greenhouse,