For those interested I thought I'd include a little overview of our plot.

It's a half plot, set out in 5 beds with grass paths. Originally it was beds 1-4 and 5 was supposed to be a path to other plots, but the end got closed off so we basically claimed it. Beds 1-4 came that way and we saw no reason to change it, it makes crop rotation very easy.

Beds 1-4 are used for the main rotation with number 5, the more narrow one being used for anything and everything that doesn't need such strict rotation as well as strawberries, raspberries and rhubarb.

Along the bottom is the pathway and the car park is opposite. As you can see, very handy for the tap.

The shed is a ramshackle corrugated iron affair which for some reason is sunk a foot into the ground, if we ever replace it I have no idea how easy it will be to remove. That said its been there at least 12 years so it is at least solid.

Our site is run by council and we aren't allowed any fires or BBQ's which is a shame. There is a large concrete structure in the middle of the site but we have no access no idea even what is in there.

The light green strip is where I plan to make a new path this year, making the fruit bed a small permanent one and bed 5 the same length as 2-4. I'd like to move the path between 4 & 5 over a foot or so as well, making them a little more even in the width department and increasing the rotation. 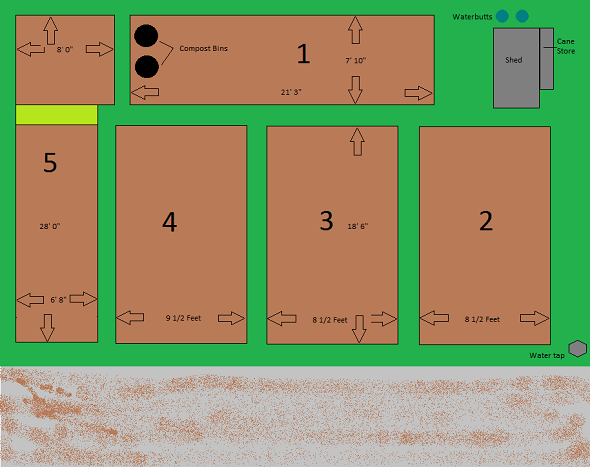 Is your plot very windy? If so it could explain the strange shed construction.

Its a big open site but not too bad, I just wonder how deep they have buried it, might find an air raid shelter or something under there given its corrugated nature. One day we'll find out