Book Review on the Dig for Victory Campaign

As the nights draw in I find myself under a wool blanket (and usually a cat) with a good book. I wanted to share my recommendation for The Spade as Mighty as the Sword by Daniel Smith. 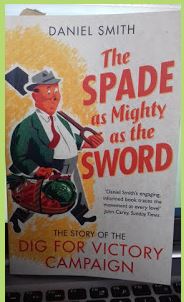 I picked this little gem up a few months ago at one of those book stores where everything is discounted. If you're interested in the Second World War and how the Dig for Victory campaign came about, this book gives a full overview.

It gives background about how the nation sourced its food prior to the war, how government policy came into being, how commercial and farm production changed and how each person was encouraged to take part.

It does have a few pages in the centre with black and white photos.

The most interesting thing that I learned from it is that the original campaign was not called 'Dig for Victory' but instead was 'Grow More Food.' In 1939 it went through a re-branding effort which seems to have paid off.

One of the Amazon reviewers stated that the book isn't much of a nail biter. I find that sort of true, it does read like a history textbook at times, dense with facts. However, it is also filled with personal anecdotes of how people reacted to government policies which balances it out.

Another neat things that I learned from this book: by 1943, 25% of fresh eggs were coming from home coops, can you imagine that today?

If you're interested in this time period or how the nation produced and consumed food at the time, I'd highly recommend this book.

Thanks for stopping by Daisy Debs. Highly recommended if you get a chance, a good read for the winter months. :)