Now that we have some rain and can take a break from watering I have a chance to update the blog. In fairness there is only so much you can write about watering and courgettes so you haven't missed much.

Bed 1
The cross breeding pumpkins are actually starting to look less like pumpkins than before, more like stumpy marrows or watermelons, I suspect they won't be getting carved up for Halloween sadly. 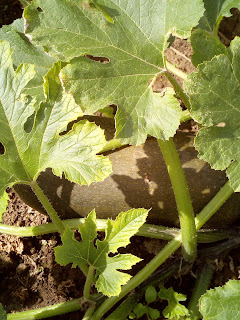 The marrows are producing some fine, and recognisable, specimens with 2.6kg for the last one, it makes a lot of marrow bake, more than we can ever eat, but I found a new taker/victim to help out so all good. The yellow courgette plant is contributing nicely to the total count
.
The 4 tomato plants I bought from a nursery have always looked like they were suffering in the heat, no matter how much they are watered, it's not blight this time, while the 2 rescued from Heathers compost bin looked healthy. I've decided it must just be the plants not the ground or watering etc. The 4 have some tomatoes on them, they just aren't very big and there aren't that many of them. One treat thought, the rescued ones are actually the choc cherry ones from last year and I didn't think I'd get any this year after mine all failed. 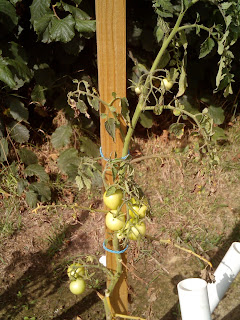 The cape gooseberries are growing nicely. there are few fruits on them but no where near ripe yet, if I remember rightly it is a little for them yet.

We still have some beetroot and spring onions in this bed too. The cooler weather has also given the chard a new lease of life.

Bed 2
Still only 1 Parsnip, it had better be good!

The first carrots are about ready, but as there aren't many I'm going to wait until they get a bit bigger before pulling anymore. They are free of carrot fly this year. 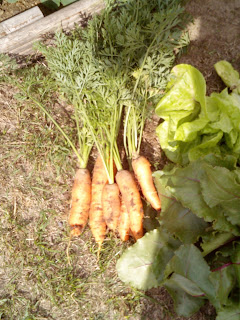 Some of the fennel has bolted before it got big enough to use, it does need a lot of water so not ideal for the recent heat. I'll try one of the other small ones just to see what they are like though, this may just not be their year.

We've pulled the shallots, they are quite small but should be good for pickling I hope, I'll be doing this as soon as I have time.

The leeks seem to have survived the hot weather transplant very well, we lost 2 out of 36 but the rest have settled in nicely. They may a little late as they got forgotten about but they look healthy enough. 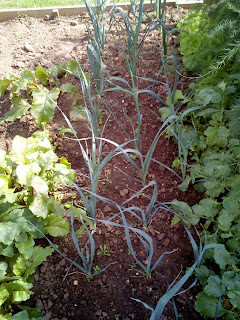 I put in 4 new asparagus crowns this year and it looks like 2 have survived and are just putting up a few fonds to over winter. I took a long time so maybe the others are waiting for cooler weather. I've not done this before so watch this space.

The lettuces hiding in the shade are nearly ready, they have been very slow, the radishes however have done very little except provide a meal for the flea beetle.

Bed 3
The spaghetti squash are also a bit crossbred this year, they are the right shape and size, but have a mottled skin. It will be interesting to see if they have their spaghetti like insides or if it is marrow/courgette like.

The 4 courgette plants in the bed are producing like only a courgette can do.

I still have potatoes in the ground although all the tops have died off, its about time I dug these up. They roast nicely but break up if boiled too long. However in the microwave they hold together very nicely. I did some reading and I think this is down to lack of water. With all the watering needed this year they were kind of left to get on with it, a lesson learned.

In the brassica cage things are looking up. Aphids and flea beetle looked like they were winning for a while but a large amount of bug spray later combined with some cooler weather and they seem to have perked up post attack and are getting on with putting on some growth. It does however look like the sprouts may be cabbages... I don't have much luck buying brassicas. 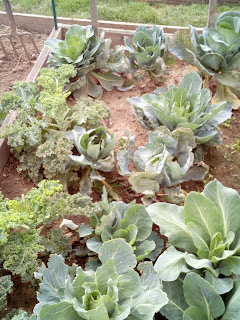 Bed 4
The purple dwarf beans have all but finished now, they were the first to start and produced a good crop so they have made the list for next year. I quite the little dwarf bushes.

The runner beans didn't do brilliantly this year but the fellow plot holders have reported the same thing, just too hot. Now it's cooler the top of the plants have started to produce more flowers so they seem to be getting a second wind.

The climbing beans have been steady but not prolific , they too are doing better now it's cooler.

As you can see they are not as bushy and thick as previous years. 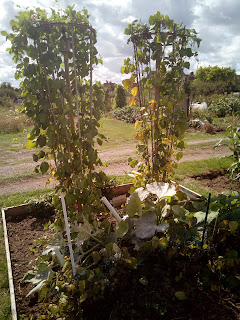 The chilli plants are small but have a few green chillies on them. They aren't in the best soil as it's an area uncovered when the grass was cut back for the borders.

Bed 5
The cucumbers are doing well and we haven't gone short. I like the Burpless Tasty Green as often they don't need peeling like the Marketmore, but you get more Marketmore per plant.

The sweetcorn are just coming through now. There are a few odd looking cobs with kernels outside of the husk, but I've seen that on various blogs and Facebook groups, in general though, although smaller than last year they don't look too bad. I made an effort to water them when the cobs were developing so hopefully that pays off. 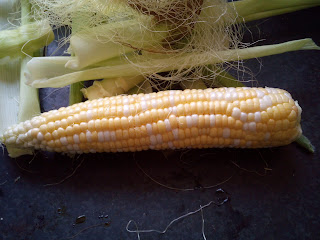 The farm doesn't look as busy as it did at this time last year, it reminds me of the veg plots we saw in Spain, everything looks a little ragged and not as bushy as usual. Also with some things seemingly finishing earlier than usual, or failing in the heat we have more bare patches than expected. As things have cooled a late sowing of lettuce and beetroot could be called for,

We went down on Sunday for the first time in a week and picked this little lot, every one needs this many giant courgettes obviously! 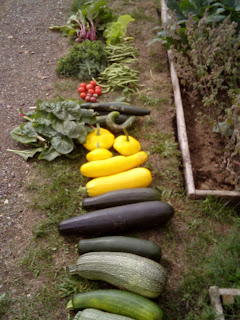 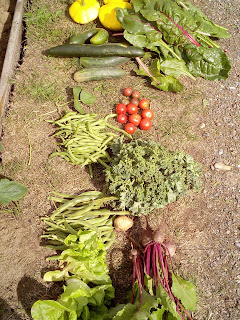 We did the same with our potatoes with the same result. They were our sacrificial crop. I think leeks are very resilient. Ours were flattened in earlier gales and I thougth they had little chance of growing but they did.

There's only so much water you can throw around Sue, love to know how much we used this year.