There wasn't a lot of time for plot visits this week but what I did find on my visit wasn't too pleasing. We have had some high winds and the broads that were overwintered and are now quite tall didn't take too kindly to them. Several of the plants had limbs snapped and were lying on the ground. I've put in some canes and used string to patch them up and provide support, most don't seem to mind it but one was too far gone to be saved. My fault, my notes for next year already say to provide support, I just hadn't done it last year. If I decide to overwinter this year I'll make sure it gets done. 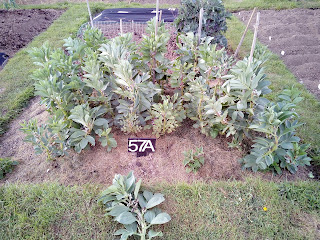 To make up for it the first row of Kelvedon Wonder are starting to come up and we seem to have a few Resistafly F1 carrots coming though but no Early Nantes or Chanteny yet. Some of the rainbow chard is just starting to poke though and this year I might actually see a spring onion, something that defeated me last year! 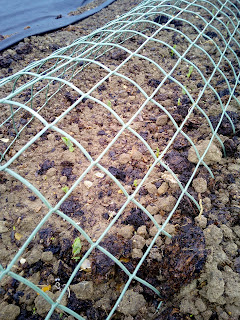 All the potatoes have survived the frosts but the asparagus has taken a knock in a hard frost that turned any above ground spears rather mushy. I composted them and await their replacements. I've taken some of the cloches off now as its going to be warmer for a few days, it does makes the watering/weeding somewhat easier but I'll be on standby for a late frost for a couple of weeks.

At home, I didn't transplant the sweetcorn in the end, but popped a another seed in each of the vacant pots and put them in a warm cupboard. This worked and I now have the full complement of 24 that I planned for. We got a germination rate for 32 out of 56 planted in the end, not brilliant but I'll plan better for it next year allowing for the this. 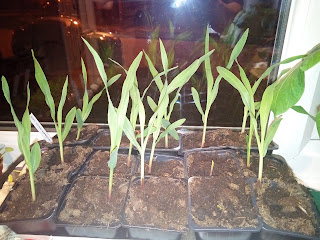 I must have got my bean planting dates confused this year and put the runner beans in too early. They have reached over a foot high now and are still in their tubes on the kitchen windowsill. Its too early to plant out here (one neighbour has lost all his to frost already), so by the time I can in a couple of weeks I expect it will be a bit like untangling the pesky xmas tree lights. 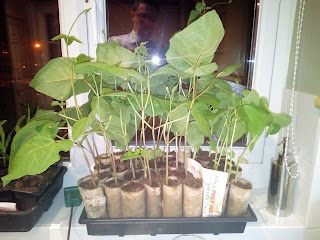 Some of my cabbages have also decided to stall/die, I suspect I may have overwatered them, or it could just be the soil based compost which won't be using again. I'm only growing them as an experiment so I'm not over worried, it just annoying.

Apart from that the only issue seems to be a Zuchinni which is coming up roots first in some kind of botanic breach birth fashion.

Time is short this week but hopefully a good few hours of plot time will present itself soon and I can crack on with all the projects I need to do before the planting out season is upon us. I trimmed up all the border timber last week to remove any rot. It would have taken hours by hand but got it done in 45 mins with the chop saw..... 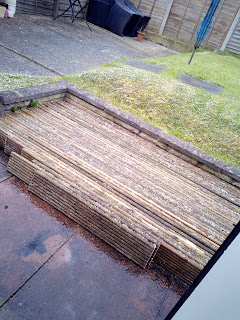 Our broad beans were off to a poor start. They had a growth spurt just before we could plant them out and were a bit leggy. Them they were battered by winds and hail. All on top of the usual weevils browsing. We never stake them. Most seem to be recovering.

I've never had any weevil issues ...... yet
Does seem like a lot of flowers haven't set though...hmmm