Looking at our seed tin I can that see this weekend is the lull before the storm, on the tomato front at least, and that very soon the potting tray is going to start looking rather full. I've been itching to plant the toms but I've been holding off so they don't get leggy before they go outside.  So before  things kick off here's a run down of the latest status.

The Cloche Experiment - Following the timings on the seed packets I put some radish, turnip and lettuce seeds under a cloche at the end of Feb, just to see if they would grow so early in the year.

Well the radishes and turnips are up and the germination rate has been good, they are growing slowly but seem quite happy under there. I may remove the cloche to stop the dampness getting to them if it gets warmer.

The lettuces haven't germinated quite so well. Once up they are fine, but germination is not great. I suspect that the temperature is too high, lettuces need a lower temperature to start growing and it gets pretty warm under there. I have put some more seeds in and will start some on the windowsill at home as well to plant out. 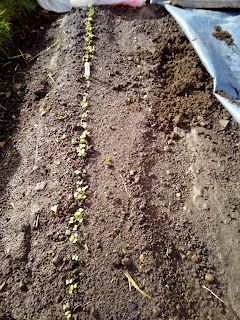 Alliums - The garlic, shallots and onions are looking good. They've been top dressed and now need a good weeding. The ground is a bit soft for hand weeding but it's on the to do list. They are just doing their thing.

Aubergines - In a word STRANGE!!. I planted 10 seeds in 5 pots and only 2 came up, in separate pots, 4 weeks later another 2 have just started to join the party. I tried to chit another dozen on blue roll but none came up. This could be that stored aubergine seed is not very viable, it was last years, but no amount of encouragement seems to get it going then it suddenly just decides to pop up. The two we have are doing nicely in the mini greenhouse just inside the back door and are getting their second set of true leaves now. 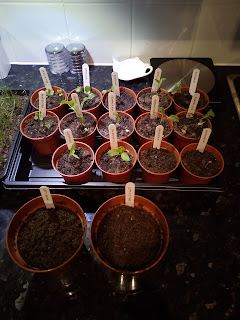 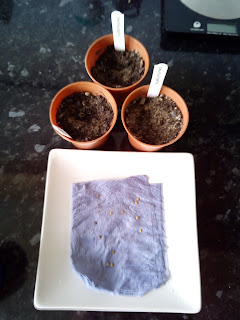 Sprouts - Last years Brussels are nearly done, quite a lot blew and they are still a bit small but there are a couple more pickings yet. This years have come up, got their first true leaves and I've potted them up into their own pots. We'll need 3 plants.

Summer PSB - Has come up, got its first set of true leaves and been potted on. It's living in the mini greenhouse until it goes out. We'll need 2 plants.

Winter PSB - Of the 3 plants I put out last year, 1 was ready in November, 1 is ready now and one 1 only a big leafy bush...hmmm. I suspect lack of ground prep last year is the issue. I'll need that ground soon so it had better step up. This years are up and I'll pot them on when they get the true leaves. We'll need 3 again.

Broad Beans - These have been over wintered this year, we lost quite a few when it snowed a few weeks back but the rest have bounced back after a good top dressing. There are some spaces now so this weekend I put a few seeds in the ground direct. I've not done much with broads before as I grow them for other people, this mixed time crop may or not be a good idea but we'll see. I remain unconvinced by over wintering them. 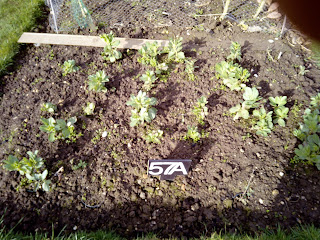 Chillies - Heather has started potting these on now as they are doing nicely with true leaves on them. They have produced a few of each variety as planned 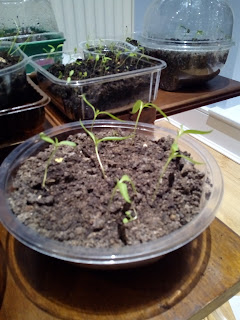 Leeks - There are a few left from last year still . This years are doing nicely in their tray, it looks like turf! I've got another deeper tray to pot them on into to get a bit bigger before going outside. I'm not sure if a double replanting is a good idea but we'll see. Last year they never got very big before going out and suffered in the rains, so hopefully this year will be better. 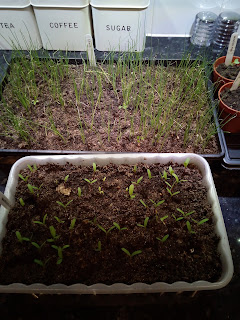 Marigolds - The first sowing got planted out into individual cells and I put in another sowing as I have about a 50% germination rate. Once potted on this should be enough.

Parsnips - A few left from last year, but they have new top growth so will be getting woody.

Potatoes - These have been chitting under the bed. They seem to be doing fine, few needed turning, I hadn't checked them for a while. 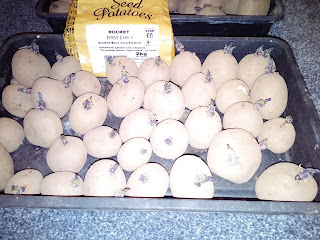 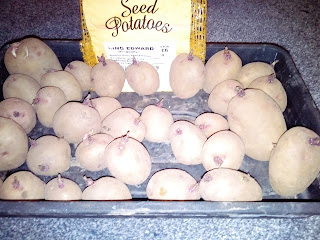 Strawberries - The runners from last year are ready to go outside. This year we'll plant them through weed control fabric to make management and weed control easier. Hopefully we can control the slugs as well. Some of the alpines planted from seed have come up, but nothing to write home about yet.

General -  We left the plot tidy and covered last season so there isn't much to do yet. We have a bit of weeding and mulching planned for next weekend on the asparagus and  raspberry beds but can't do too much until the paths and ground dry out a bit.

I tried to sort out the autumn raspberry bed today but the soil is just mud and too wet to deal with.

Like you, I think that over-Wintering Broad Beans may be a waste of time / effort. A lot of them seem to succumb, and even if they don't they may not mature much earlier than Spring-sown ones.