Apologies for another bean pun, I'm sure it won't be the last.

The runner beans went in a couple of weeks early and had got rather out of hand, it was turning into a right old cats cradle and they really needed to go outside. So we've taken a risk and they've been released into the wild this weekend.

I've read a couple of times about building the bean wigwams upside down, poles leaning outwards at the top. The reasons for this make sense, (see the pros and cons later), so I decided to give it a go.

Here is my bean support. I got a couple of bike wheels for free and mounted them on poles hammered into the ground then added the poles and secured them to the rim of the wheel using plant ties.

The beans, still in their cardboard tubes are planted 2 to a pole, 1 inner ring, 1 outer ring and trained to the pole with string. To help with watering a couple of small coke bottles with the bottoms cut off have been sunk in round the sides. I may add a couple more. You can see how scrappy they had got. 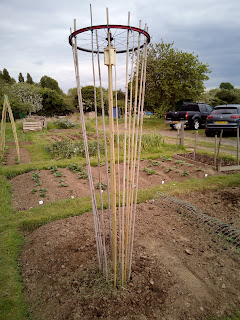 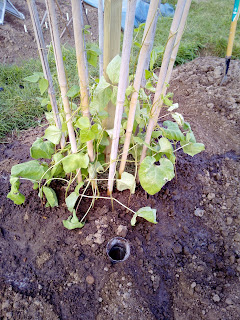 Finally I added a bit of protection from the wind with the micro netting that we normally use for the carrots. The plants had already suffered a little windburn during the hardening off process 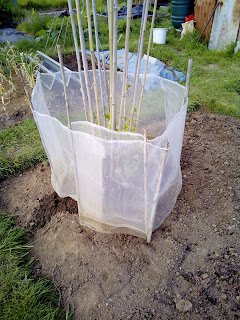 We checked the next day and they seem ok, I expect they will suffer a bit of transplant shock though.

Next year we may just plant direct in mid May, I've always done the indoor planting in tubes before, but we will be doing this with dwarf beans shortly and if it seems to suit our site it may a good idea to save space indoors.

Pros:
(The official ones)
Less crowding at the top of the poles
Better airflow around the tops of the plants
Easy to pick the crop
(Mine)
Less ground space used - The base of the canes are closer together, with the wheel size I could fit 3 of these in the space I had 2 traditional wigwams last year.
Easier to mulch - Last year clearing weeds inside the wigwam was a pain, this year I have filled the base with grass cuttings. Also as the foot print is smaller less are needed.

Cons:
The plants are close together - They will complete with each other for water etc.
Stability - Its fine at the moment but once the plants reach the wheel and produce beans there will be a large area for the wind to hit. I may need to add some guy ropes.

Good luck I will watch with interest. We grow our runner beans and climbing French beans up at cane tunnel. We do have plenty of room though.

I saw the cane tunnel setup on Allotment life a while ago, looks great and a good use of the space. If this doesn't work as we hope then that may be the next option