The (Late) May Update

The middle of May is never a good time to take a holiday, there's just too much to do and Jack Frost would love to pop in and check on your plot when you can't be there to stop him.

The farm, and all the plants at home had to be left in my dads care as we headed off to Euro Disney for a few days. Withdraw symptoms after 5 days of no allotmenting are common so I tacked an extra days holiday onto the break and spent 6 very peaceful, sunny hours pottering on Monday.

So here's the late May update

Bed 1
The garlic looks good, the bulbs look big and to have split nicely. The onions and shallots, not so good. Most seem small, the tops seem to be dying off a bit early and some have fallen over and come out of the ground, it looks like the dreaded white rot. Hopefully we will still get some for immediate use and the garlic will escape. Not sure putting the leeks in this bed is a good idea now, although now the temperatures are up it should help. Keep you posted.

Parsnips and carrots are proving to be a pain this year, 2 plantings so far and we've still not got a full row of anything! I've put in another row of Royal Chantenay 3, directly into the soil not into compost this time, we'll see what happens. The cloche is off the parsnips now as well.

A row of Fennel (DiFirenze) went in directly, we've never tried this before. The final crop for this bed is the celery, which is at home at the moment, like the fennel it needs to kept moist so I must do the irrigation system soon. 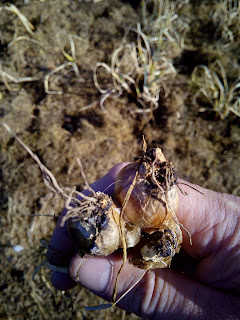 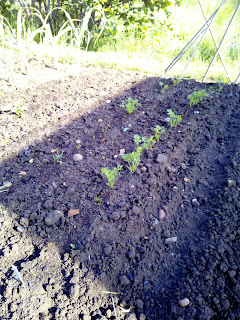 Bed 2
The spuds are going well, no flowers yet but it's early days. All that was needed was a quick weeding and to earth up some more to stop any spuds getting a taste for daylight.

The asparagus is cropping nicely, although occasionally at odd angles, a few weeks to go yet. On its own this pretty much pays the £29.00 a year the farm costs. 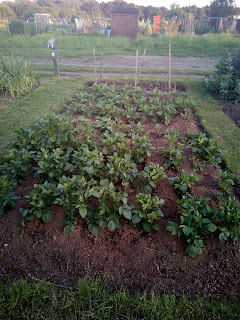 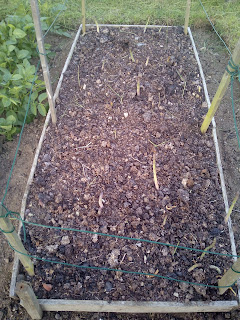 Bed 3
We are having a bean issue at the moment, some of the runners I planted out have lost their growing tips and aren't looking good. At the weekend I'll work out which ones have had it and take them out, I'll replace them with a seed to fill the gaps, they'll be a bit behind but a staggered crop may help prevent the usual bean glut. A row of dwarf beans went in direct into the ground so will also help to keep cropping levels up.

The peas are starting to explore the top of their protective netting so the supports will go in soon with some CD bird scarers. A second row has been planted to extend the pea season.

The broad beans have a good number of pods now, the beans are small but they are already tasty. The black fly have moved in today, we haven't had a chance to nip out the tips yet, they are pretty early this year. I haven't got any bug spray at the moment so I gave them a good squirt with the castille soap, it works on white fly so hopefully it will work on these little buggers before they do too much damage. 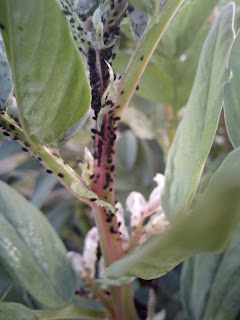 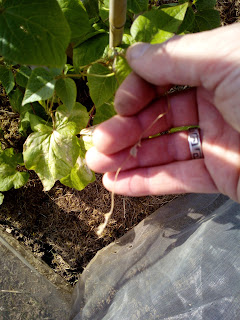 Bed 4
Spinach and chard are coming on nicely, hopefully we get some spinach before it bolts, I had no luck with it last year. The rest of the bed is pretty quiet, the last leeks to come out. I've built my brassica frame and ordered the netting. The sweetcorn and some squashes and brassicas will go in at the weekend. The danger of frost should now be over. 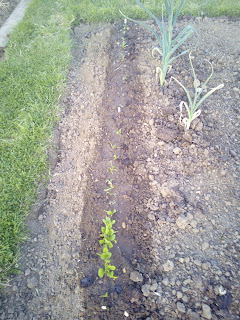 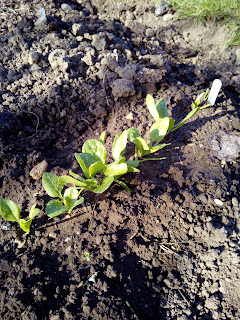 Bed 5
The salad bowl lettuce, radish and turnips are all cropping nicely. The replacement beetroot are coming up and the Sierra and Little Gem lettuces are finally putting in a growth spurt now its warmed up.

I put in the strawberry plants Heather wrote about earlier the other day. They had spent winter in small pots with poor soil which wasn't ideal but a good blast with a balanced fertiliser and seaweed extract has really perked them up. There are flowers so if we beat the slugs to them there will hopefully be fruit!  It was the first time planting through the weed control fabric, it was a pain but hopefully worth it with less weeding. 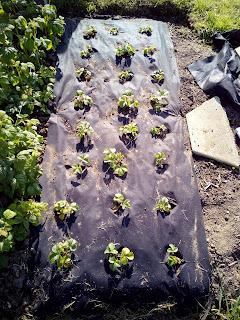 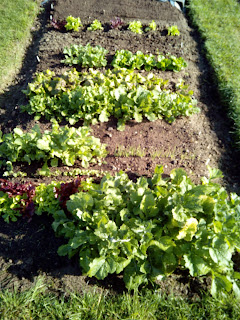 At home I have the most leggy tomato plants ever. My house isn't ideal light wise and I don't have a greenhouse apart from one of those mini things. Those of you that have are very lucky. Worst case scenario I'll plant them deeper and get a longer cane :O)

Happy gardening folks!
Posted by Dicky at Wednesday, May 24, 2017

We are having a apronoems getting parsnip and carrot seeds to germinate this year. I guess we will need to resow

It's a bit of a pain, carrots last year were great, this is the second year parsnips have been troublesome.

Best of luck with them!!

Hello , just popped over from Allotments4all to see your veggie blog . I love the idea of putting debris netting at the bottom of the runnerbeans and might just do that myself...thanks for the tip ! Daisy Debs :)

I've the wind strip them before and our site is a bit exposed so it seemed to make sense.