So with everything except the leeks and successional sowings in the ground the farm now looks pretty busy. So far it all seems to be taking nicely with only a few problems. Here's a bed by bed run down.

Bed 1
The asparagus is just about done for the year but has had a good season, a solid 6 weeks of cutting and 3 out of 4 of the newer crowns have put on some growth this year. I'll give it final cut and a covering of manure soon and let it grow out for the summer.

The cucumbers are up to 6 leaves now, 6 out of 7 plants have survived being planting out, and once they get to 7 leaves I'll nip out the tips to get the side shoots going to produce the fruit and secure them to my trellis.

Gherkins are nearly big enough to be secured to the tripod now, again I'll nip out the tips. The sweetcorn are getting taller and the pumpkin and butternut plants should cover the remaining ground to keep the weeds down.

My spring onions are nearly big enough to start harvesting, I haven't managed to grow these in years so looking forward to those. There is a second sowing in and some beets and Asian radish just starting to come up. 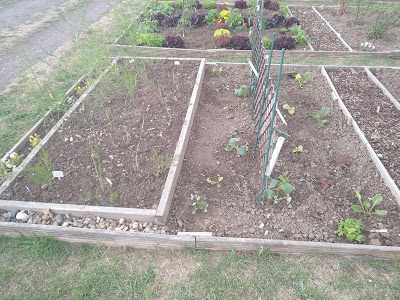 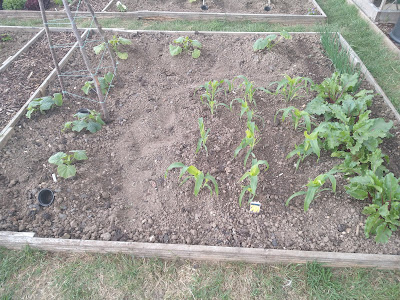 Bed 2
My salad bed is getting some nice comments. I've started picking leaves off the Salad Bowl and Lolo Rosso and have now picked the first of the Amaze little gem style ones. As I pick them I have green Little Gem, more Amaze and Rocket ready to fill the gaps. The tomato plants are just starting to flower and I've put in a beetroot seeds at random for some visual variety.

The Oca is doing well and my 6 courgettes are just showing signs of the first fruit of the season. 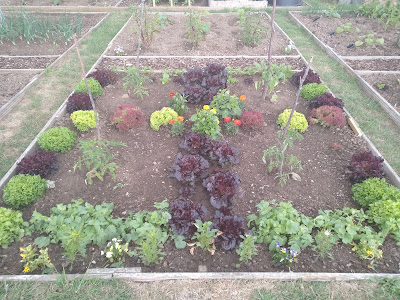 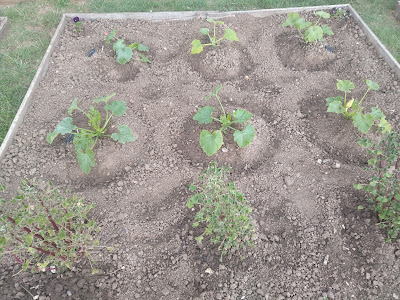 Bed 3
Main crop spuds are well earthed up and just starting to flower, earlier than the early variety, wonder if I got the labels wrong.... The leeks will go in behind these soon.

There are 4 half rows of carrots inside the carrot fly netting, several staggered plantings, they are small but growing nicely. The parsnips however are putting up a fight this year, more than usual, I still only have about 50% up so far.

My onions, white from sets and red from seeds are doing well, unfortunately pickling onions are being a real pain this year, the first plantings in compost and direct have been a no show. I have a last desperate attempt on the kitchen windowsill at the moment, fingers crossed. Luckily they only need a short growing season to get to pickling size. 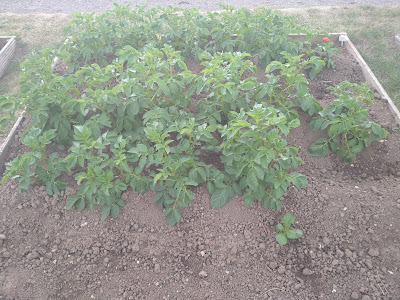 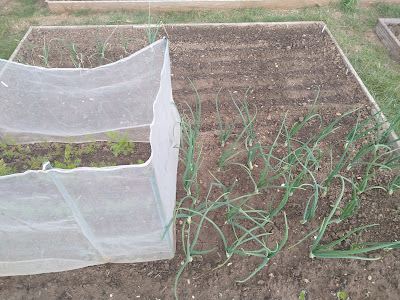 Bed 4
The small cage has my summer cabbages, a cauli and a Romanesco broccoli and all seem to be doing ok despite a mealy aphid attack which was quickly despatched with the bug gun. Hopefully they make a full recovery.

The big cage has Kalettes, sprouting broccoli, sprouts, all well supported against the recent winds, and kohl robi. The kohl robi are just starting to fatten up and I must remember to pick them a little earlier this year.


The early spuds are all looking healthy, one has gone missing after the earthing up against the late frosts though. 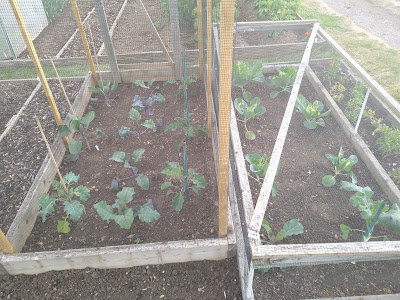 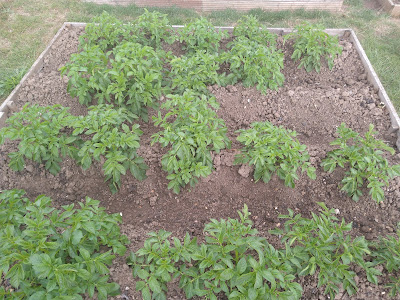 Bed 5
I'm doing my beans, yellow and purple bush and green climbing, in 2 sowings this year to try and avoid the glut which wouldn't be able to get rid of while I'm not going into the office.

The green Cobra beans all came up and will heading up the poles shortly, the bush ones are either being attacked when they come up, get dug up by wildlife or just aren't germinating well. I've had to sow them twice and still haven't got full rows!

The marrows have mini fruits on them but the flowers on them aren't fully open yet, and there aren't many male flowers about yet either

I've started picking broad beans early while they are still small, again to avoid a glut I won't be able to get rid of. They seem to have a decent crop on them despite the black fly which were again dispatched with the bug gun.

In the cage the pod peas are flowering now and the mange tout are about an inch or so high. Again they were stagger planted. The first of the beetroot are almost ready to harvest, being a bit bigger than  golf balls now, 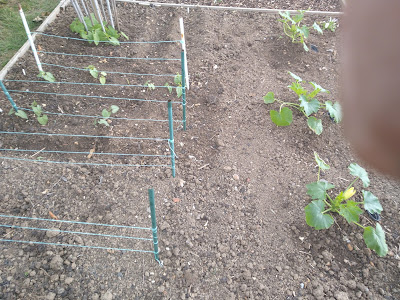 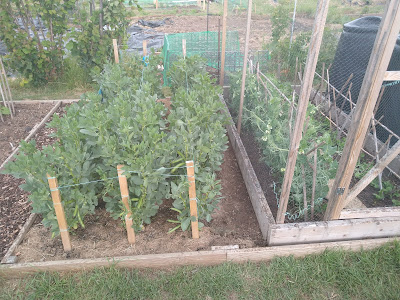 Strawberrys
I've had 3 off of these so far and while there are plenty more they still seem a bit small and aren't ripening very quickly, but the birds aren't getting them this year! 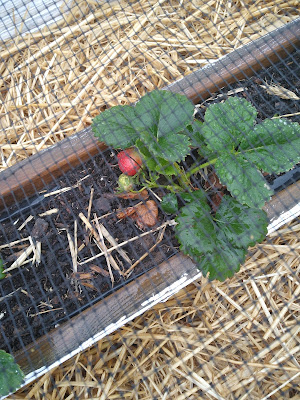 Hope your seasons are off to a good start.

Ooopppsss.. Sorry Debs I accidently deleted your comment while deleting a spam one.... Trying to get it back