Too much time on my hands

I'm still working during this little adventure, from home rather than commuting to London, and the 2 1/2 hours I'm saving each day does give me a lot more allotment time.

I've had time to uncover and prep all the beds ahead of planting out, which I've held off doing while quite a few of my fellow plot holders were caught by those late frosts. It looked a bit bare and sun baked but ready. 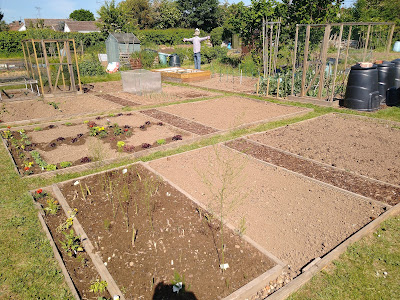 The weather is bit crazy this year, having waited for the usual late frost I am now waiting for the heat wave and the high winds to pass before putting out squashes and tomatoes.

I have bitten the bullet though and planted out bedding flowers, brassicas and some sweetcorn I ended up buying from a garden centre as mine were pretty much a no show this year.

I was doing some shopping in Aldi yesterday and picked up some willow trellis and 6ft plastic covered poles to make a cucumber trellis so that was a nice result. 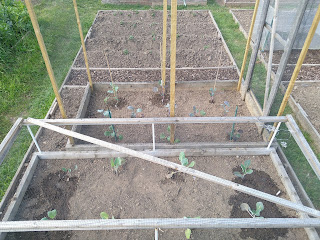 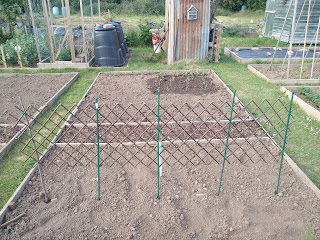 I'm hoping to get everything else planted out on Monday when the weather returns to something a little more like what we would expect for this time of year.

It's certainly nice to see everything so tidy as I've had the time to put into it.

We are desperate for some rain to avoid planting in dust.. the sun and strong winds haven’t helped. People on our site are all complaining that things just don’t seem to be growing at all well.

Some rain would be most welcome right now. There is still quite a bit of moisture deeper down and I've taken to using a moisture meter when watering to avoid spending hours on it. Things seem to be growing ok, but then I don't have much out at the moment until this wind drops.

I’m afraid even digging down there is no moisture to be found on our plot. Under the weed control fabric is a tiny bit better.

I left my covers on until for as long as possible, certainly helps.

Feel sorry for all the newbies on our site trying to basically break concrete. One guy has been putting on so much water to try and soften it I actually though he was putting in a pool!