This lockdown has bought  host of new growers to the game, whether it is something they always wanted to do and now have time for, or people concerned about the food supply chain in the current situation.

While it's great to see the overgrown and unloved plots on our site being taken over and worked it appears it has bought about a new problem, lack of supplies. People trying to order seeds online have been quoted delivery dates of June, not a lot of use, compost supplies are slowly catching up but around here getting some things has been difficult.

No doubt garden centres opening this week will help, but I wouldn't want to be in the fight in the seed isles!. I also suspect that the allotment'ers community spirit will help out anyone who is short with spare seeds and plants, I've already donated a few. Hopefully these newcomers enjoy their first year and carry on.

I wanted some bark to top up the paths and managed to get some from a small local petrol station/shop, I didn't fancy risking B&Q. The plot looks good with its freshened up paths, if a little bare at the moment. 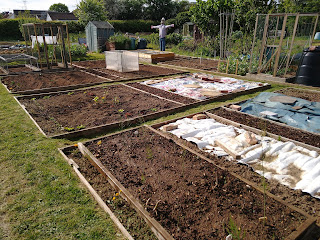 Asparagus season has started, slowly at first but the last couple of pickings have been like this. It's the first proper crop from the plot this year as the usual winner, the radish has been a bit lazy, they will be second though. 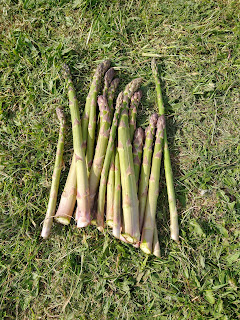 My peas are looking good so far, they seem to have appreciated a seaweed feed last week. These are a pod variety called Boogie. I will put the Shiraz mangetout seeds in at the end of the month, nicely staggered to avoid last years glut. This year I plan to replace the Boogie's with winter cabbages as I'm planting those later this year as well. 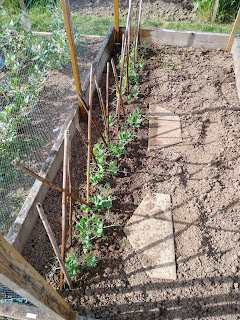 All but one of the lettuces has survived being planted out in the salad bed and the second sowing of radishes and beetroot have germinated nicely. 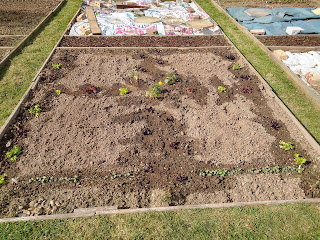 Back home the greenhouse is doing a good job and a bit of tetris means everything can be accommodated. 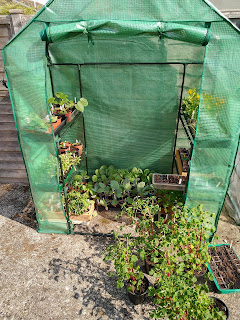 There have been some strange germination rates this year, out of 24 sweetcorn I only have 5, I suspect I won't get replacements anywhere, there are no pickling onions and I had to plant some donated white onion sets as my seed onions failed both times. I have enough tomato plants but only 3 of the 5 varieties came up.

I'll need to recheck the dates on my seed packets but even allowing for some older seed this has been a strange year germination wise.

Runner beans are proving erratic for germination. Admittedly they are the remnants of previous years' supplies but 5 out of 9 (Barlotti) is the best hit rate from 4 varieties.Red Rum, Red Emperor and White Emergo not so good. French climbing bean Python is worse and that is brand new this year! Curiously dwarf French beans Tendergreen and Dior are nearly 100% !

It's certainly a strange year for it. The seed tin will get a big clear out at the end of the year. I think my seed bill will be quite large next year!