First of all, apologies for the lack of pics on this one, I forgot to take them before I wrote this in a hurry before leaving for the airport...

In previous years there have been things sprouting under cloches on the farm at this time of year, but this year so far... nothing.

There are 2 reasons for this, firstly we are still getting some pretty impressive frosts and secondly I go away for 2 weeks shortly meaning popping in to water on the way home is a no no. Once I'm back hopefully it will have warmed up a little and we can get cracking. This doesn't mean we have been doing nothing, at home the sowing and potting has continued.

Every broad bean came up and they seem to like it out in the mini greenhouse. They will be planted out when I get back at the end of March, hopefully after the winds have abated.

The cabbages and Kohl Robi have been pricked out and are growing on nicely. They may go under cloches soon, I haven't decided yet.

The chillies are slowly germinating but taking their time. Once up they spend the day under the grow lamps to stop them getting leggy.

The Marigolds, unusually had a poor germination rate and had to have a second sowing, again with mixed results. I'm not sure quite what is going on here, they usually germinate under almost all conditions.

Onions germinated well, now thinned to one per cell they are getting their first proper leaves. I've been trimming them back to about 3-4 inches in height to stop them falling over. They seem to like the mini green house as well.

This weekend I planted some beetroot in cells. I've never done this before but as you can buy plug plants of beetroot I figured I'd give it a go. Also some Convululus and sunflowers, leeks, pumpkin on a stick and a couple of Apero tomato plants to see if the grow lights stop an early sowing going leggy.

I almost forgot these, under the bed the spuds and Oca tubers are chitting nicely. 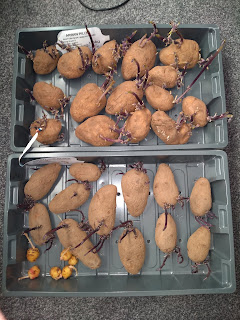 When I get back things will start to ramp up with the main sowings of peas, parsnips, early carrots, and early spuds. I look forward to finally getting things moving on the plot.