After 2 weeks away it was nice to get down the farm for a couple of Saturdays and make a start.

First a little house keeping, trimming all the grass paths, which only took 20 mins thanks to the raised beds, rather than the usual 2 hours, topping up the bark on the cross paths and a bit of weeding.

Next was to plant the potatoes, as the pic shows they had got a bit carried away in the chitting department this year. They were under my bed as per usual so no idea why they went quite so mad, maybe I'm going soft and had the heating on more this year. 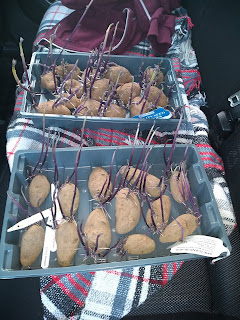 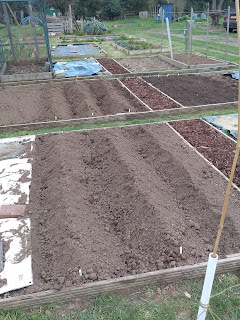 So that's the Arran Pilot and Shetland Black planted out. As a little experiment I planted the Arran Pilot 6 in one row, 5 in the next and 4 in the final, just to see how yields are affected.

We are expecting a couple of cold nights so they are well earthed up.

Next was to plant out the broad beans, they have been out in a cold frame so are nicely hardened off. The farm can be a bit windy so they have string supports, it also has  lot of pigeons so CD bird scarers and finally slugs, so slugs pellets. Not much more I can do, they are on their own now. 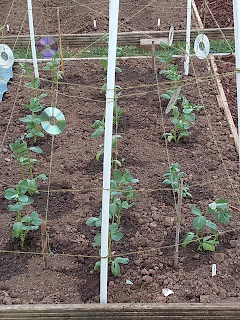 I've put in 2 rows of parsnips and 2 rows of carrots and covered them with cloches to keep the temperature up and also to stop the rain capping over the soil. After last year I'm hoping for more than 2 parsnips! 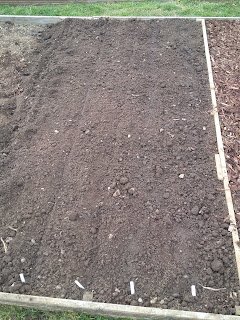 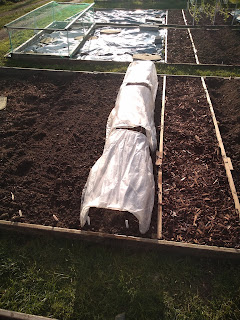 I've built a pea cage for this year, without it the pigeons will eat more than me. I find covering things with nets that need removing for weeding and harvesting a time consuming pain in the preverbal. This one is high enough for me to stand in and I should be able to get 2 rows in there nicely.

I ran out of staples to finish the netting but I wasn't planning to plant the peas until next weekend anyway as we are due 3 days of rain this week. It's in the diary for next weekend. 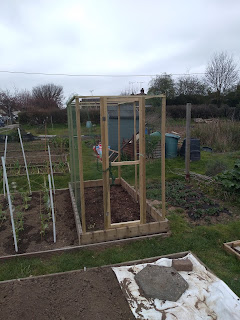 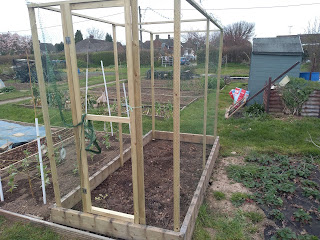 As the first Saturday was nice and sunny a quick beer on the plot was called for. 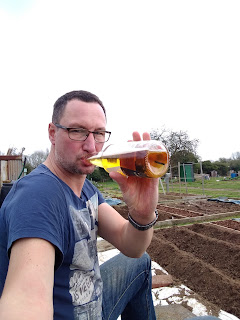 Thanks debs. I hate mucking about with nets over stakes etc. At 6'1 I di need a bit if head room ...lol