Or at least the grass on it had any way.

My last few posts have all stated that we haven't been able to get much plot time lately, all we have really done for the last 6 or 7 weeks is pop down, pick and water and feed when we could, leaving everything to fend for itself.

Finally on a sunny Sunday afternoon last weekend we had time to play catch up.

First order of the day for Heather was to pick her winter squashes, the Spaghetti and the Uchik Kuri pumpkins for storage. The spaghettis are from the same seeds as last year, but much bigger than last years crop. Either we must have done something right, or we got lucky. All the squash plants are slowing down and dying back a bit now, I know you wouldn't think it from the courgette count!! As the plants have a few more flowers and undersized pumpkins we left them to continue growing, maybe without these fruits and after a feed they will have a second flush of youth. For now we're happy the first wave is safely away from mice etc.

Next was the beans, the runners, dwarf and French varieties all needed a  thorough picking, rooting out those illusive stragglers that hide behind the canes. The inverted teepee has made this easier this year with less congestion at the top of the poles, definitely one to continue. The extra ground space around the base also helps.

As you can see, add in courgettes, cucumber, the first outdoor pepper and a turnip pulled up during the weeding and we got a decent haul for the day. The beans Heather is supposed to be freezing, but most never get that far. Then again not many tomatoes make it back to mine!! 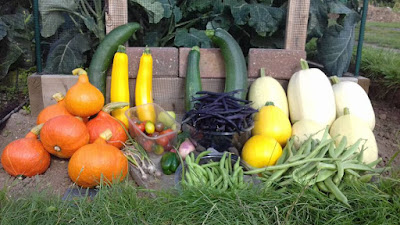 My Halloween pumpkins are starting to colour now and as well as my 2 bigger specimens I found another little one growing down the side of the bed about 10 feet away from the others.

The shop bought butternut squash plants have done very little, just the one small fruit so far. They went in a bit late and may have got a bit over crowded. Like our centre of the row cucumber plants that weren't as fruitful as the outer ones.

Better spacing next year me thinks. Hopefully the mice and slugs don't get to them before they are ready for me. 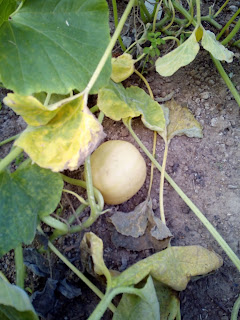 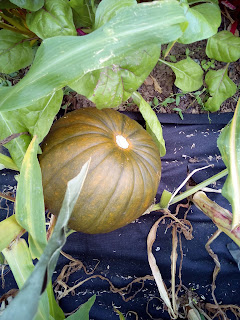 Talking of pests, something has been at my carrots!! Quite a few now have been nibbled, almost hollowed out at the top. Sometimes this can actually chop off the top, which whatever it is doesn't appear too keen on. Seen here next to a healthy examples of Resistafly F1 you can see the damage they do.

Given that this year has been pretty much pest free, we've hardly seen a slug or lost anything to them, I don't think I'll put too much effort into irradiating the critter as I have enough to go round.

Resistafly by the way do seem to work. No signs of carrot fly attack and they are a good tasting carrot to boot. Maybe having them next to fennel has helped too 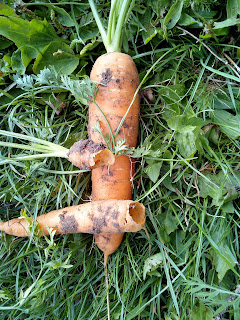 While Heather was busy harvesting I was busy tidying up. Which mostly consisted of rediscovering the edges of the beds and disturbing multiple red ants nests....que several painful bits. Seriously why do we need red ants!

Once the edges were done a run over with the hand mower and a final strim round the edges and shed, or at least it would have been if the strimmer was charged, something I was sure I had done.

Never mindI thought, I'll use the time to finish the new asparagus bed frame, nope, the battery drill was dead too. Not really my day in the battery department so with the farm looking a lot more presentable we called it a day after 5 hours. 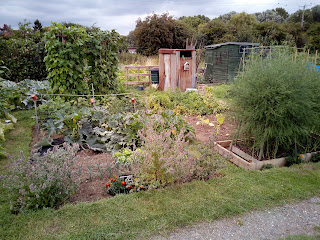 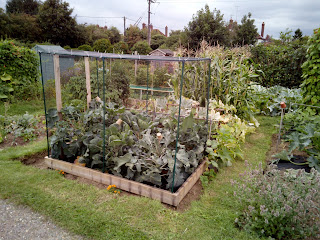 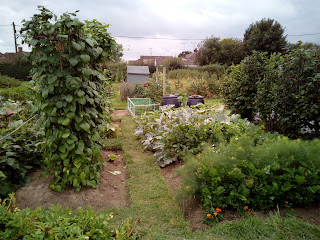 A satisfying daywith one last discovery, I think someone at B&Q had been messing with the plant labels, my Kale is looking a lot like cabbages!! 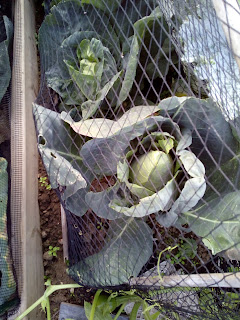 Looking good. I have had some very nasty ant bites. Ants do seem to be any the increase.

Wow when do you sow your pumpkins/squash/cucumber? It's nice to get a return for your efforts. Are you suing about the Cabbage?

Certainly do Sue, we keep bite wipes down there now but they seem to be getting worse.

Planted mid April Mal, 10 days hardening off then planted out 1st June. I like cabbage, the kale was for Heather, so she might...lol