Today the temperature read out in the car hit a barmy 16 degrees C today, the sun was out and I felt the urge, so  it was on with the gardening gear for a bit of a general tidy up and the first outdoor sowing of the season.

The lettuce and radish packets say you can sow outdoors in Feb but I've never bothered always thinking it was too cold, however given that we have had a good week of warmer weather with decent day/night time temperatures forecast for the next week or so I though I'd see what happened if I sowed some seeds under a cloche or two.

The bed has been under plastic since November so I rolled back just enough for my planting. The soil still looked in good condition and I had taken a couple of gadgets to check it out. The soil temp an inch down was 12.3 degrees on average as soon as the cover came off, the moisture level was good and the PH read a little above 6.5 as it had been manured last year.

I put in half a row of French Breakfast 3 Radishes, half a row of snowball turnips and a row of lettuce seeds which I'd mixed from Little Gem, All Year Round and Red/Green Salad Bowl. I've covered the rows with polythene cloches and blocked up the ends. They run east west so should capture any available midday sun..................... and now we wait. Hopefully I'll soon be escaping the salad shortage!!

Elsewhere on the plot I just picked few leeks, sprouts and parsnips, all of which are still rather small. The parsnips are starting to sprout again and will go woody soon so we only have a few weeks to use them up I suspect. I planning to make leek and potato pasties (with cheese) soon which will help to use the leeks up too. The chard from last year has pretty much given up so that was composted and I did some general weeding. I need to give the broad beans and over wintering onions etc a top dressing as soon as I buy some Growmore or similar.

At home the leeks have come up well, the summer purple sprouting broccoli is just starting to get it's first true leaves so will be repotted soon, the chillies are just starting to get going and around 50% of the marigolds have come up. I never have much luck with those. The only thing not yet to have put in an appearance is the aubergines. If nothing happens with those by the end if next week I'll try chitting some seeds on damp kitchen paper and potting up from there.
Herbs and Alpine Strawberries (freebies from a popular gardening magazine) have gone into pots as well. 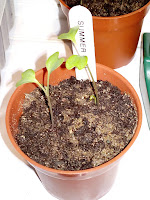 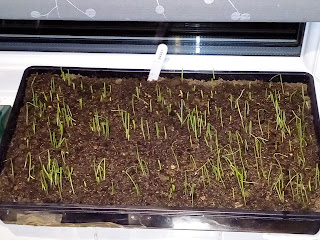 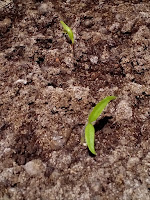 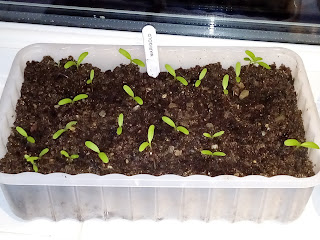 I don't trust the weather just yet.

Normally I wouldn't plant anything this early, it's more of an experiment with some seeds I can afford to lose to see if cloching really does extends the season. stops the window sills getting too clogged up too