We Are Back In The Farming Business!!

After a break of 9 years Dickys Farm, now known as Dicky and Heathers Farm, (there is a fellow keen gardener with me), is back in production.

In fairness it never stopped, following a few life changes I handed it over to my dad to run and never blogged it. Now with it all getting a bit a bit much for him, and with a very knowledgeable partner in crime it's time to pick it up again.

We started last year but never blogged it (the power of Facebook prevailed), but I've decided to start posting again.

When we started again we were a little on the back foot as my dad hadn't been able to clear up as much as he would have liked the previous year, the dangers of getting old he tells us. We had a lot of digging, weeding, clearing and sorting to do although the soil was in  great condition thanks to his hard work.

Here is what we started with, generally it just needed clearing, weeding and digging over.


The Rhubarb and Raspberry's got a  bit "grassy" over the winter and still need a bit of work. Less canes and a herb garden is planned. 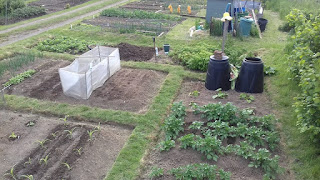 By shoving the Mrs up on the shed roof you can get some aerial shots. Things are just getting going here, lots of bare earth still to be seen. 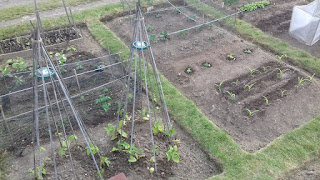 Aerial 2  - Early days for the beans, wind nearly got them but they hung on bravely.

When your back aches from digging, even if you cheat and use machinery, there are some things that make it worth it. Here's couple of shots of our hauls. Hoping for even better next year! 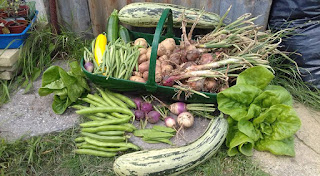 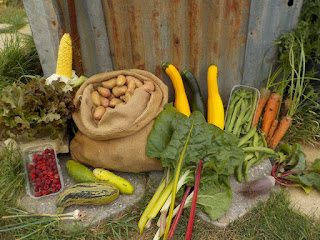 Once I've sorted the rest of the pics from last year I'll post some more along with the current state of play.
Posted by Dicky at Wednesday, December 28, 2016