It was the few showers and the promise of more, along with some reasonable temperatures that made me decide it was time to plant out the sweetcorn, that and the fact they were trying to escape from the bottom of the peat pots!!!! The beans are getting the same way so the last of the leeks and parsnips will come up this weekend to make room for the canes and planting out. It's a little early for my liking but I can always get the fleece out. One plot holder has risked putting out tomatoes plants already.

Elsewhere thinks are cracking on, all the spuds are up, the cauliflowers are holding their own, lettuces look good, the flea beetle have had the Pak Choi and there is even evidence of some carrots coming through.

Not a lot harvesting right now, parsnips, radishes and leeks are about it. Hopefully the lettuce will be coming through soon.

The Radishes and The Flea Beetle Bitten Pak Choi 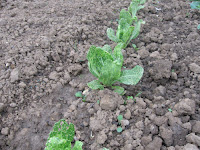 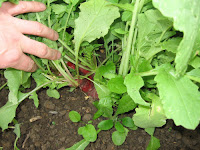 The Cauliflowers and The Lettuces 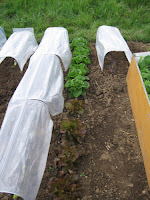 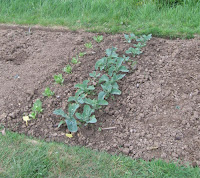 Dicky, I am impressed by your radish. Such a quick grower seems determined not to grow on my allotment at the moment. Have sowed lots more so fingers crossed!

Would those be very late parsnips? or very early? I would love to extend my season.

WOW I was sitting here reading your blog for the first time thinking gee it's early for sweetcorn! Then realised I'm on the other side of the world! Your patch looks great!
cheers Kirsty