This time last year between the date of my last post this year and now I'd written 14 posts. My apologies for the tardiness this year. Its been a funny start to the year for personal reasons, with limited time and weather windows, and to be fair I was too embarrassed to post pics as the grass was a mess, more later. So where are we?

At home we've been planting the usual array of seeds and have even invested in some plant lights to stop the usual leggy plants as most of my window sills face west. Purchased from Amazon and running on a cheap plugin timer. 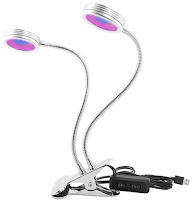 It as real mixed bag this year. The sweetcorn, leeks and most of the squashes are looking pretty good although some are a little small, they shouldn't be pot bound yet so maybe they don't like the compost. Hopefully planting them out and a feed will give them a push to catch up. Everything was planted a little late this year because of the cold weather and personal commitments so maybe that plays a part.

The brassicas, kale, cabbage, sprouts and PSB are looking rather small considering how long they have been growing, not unhealthy, just small. I'm not too worried as they aren't really needed until later in the year, they are more winter food to me. Again hopefully planting them out will help. 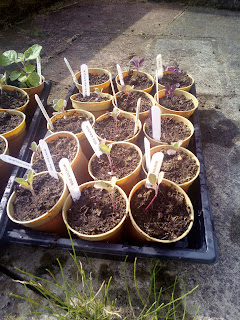 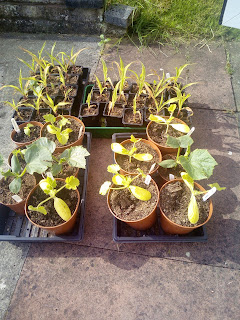 The tomatoes however are a disaster area. I have no idea why, they came up pretty quickly and the first two leaves were fine, but once the first proper leaves appears they stalled, despite the plant lights. It looks like we'll be buying in standard varieties  this year as there is no way these are ready to go out. 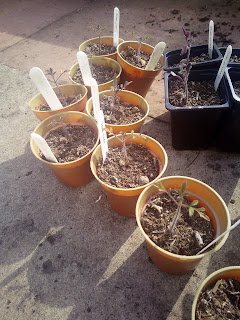 On the plot there is some progress. In bed 1 all the original plantings came to nothing but the second round is fairing better. We have beetroot, radishes, chard, spring onions and some lettuces. There is also Purple Orac, a new one for us. It's a spinach substitute, I've no idea what it tastes like yet but its certainly a pretty looking plant. Flea beetle have got the better of the turnips though. 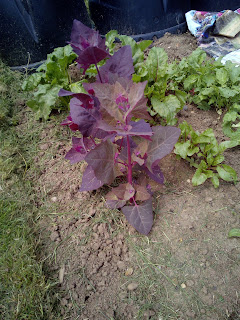 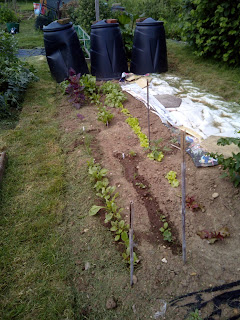 In bed 2 the garlic and shallots are looking good and the asparagus is having a run away year, every couple of days there is a decent sized bunch, turn your back and its 2 feet high! The 4 new crowns I put in have yet to make an appearance though. At the other end of the bed are the roots. A row of parsnips, 2 rows of carrots and a row of fennel. This year I've tried a seed tape for one variety of carrots, I've heard mixed reviews but wanted to give it a try, hopefully it will save on the thinning. So far only the packet sown carrots have come up. 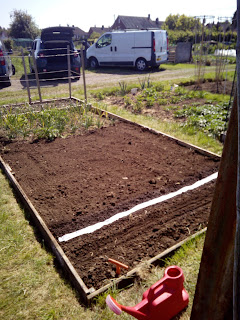 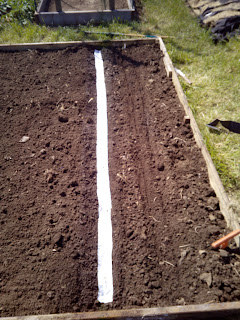 Bed 3 has the  spuds. Charlottes, Foremast and some King Edwards planted from last years leftovers. The brassica cage has been moved to the end that had the beans last year, hopefully a good source of nitrogen from last years roots which were just dug in. I've just planted out the first squashes, 2 marrow and a spaghetti squash. The pipes hold about 1 litre of water which slowly soaks in around the roots. Courteously of a bit of skip diving! 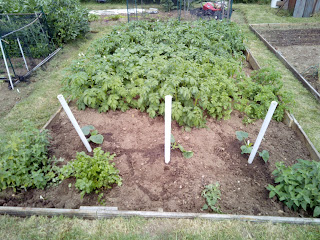 Bed 4 has the broads which have just started to produce the first small beans and are having their first black fly attacks. The climbing, runner and purple dwarf beans are up. The reverse wigwams are in use again this year. There are also 2 rows of peas planted a few weeks apart. The carpet bombing seed planting approach seems to have worked and with already have one very bushy, healthy looking row. The pigeons are sitting on the netting eating the tops off, but we may actually get some this year. Another project for this year may be a decent sized pigeon proof cage. 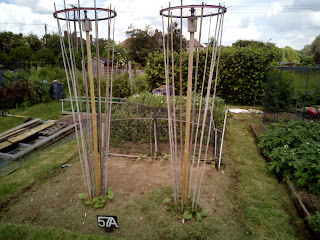 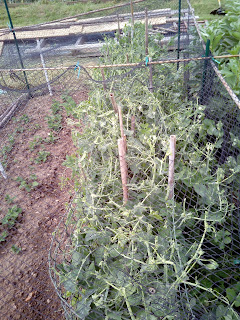 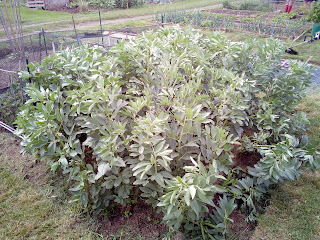 Bed 5 is still under cover. The strawberry bed at the end is looking productive, there are a lot of green berries and some red ones their already. The raspberries are also starting to flower.

You may have noticed the wooden frames round beds 2 and 3. I'm slowing putting these in, they will provide nice even sized beds once done and should give us a good 15-20 sq ft more growing space per bed once done. It's just taking a little time to complete as it involves moving some of the paths around. 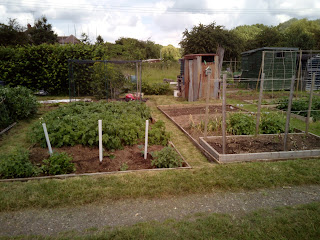 The grass got very out of control. We have been having some strimmer issues this year which have now been solved by the purchase of a petrol generator which allows me to use my home electric strimmer down there. This  removes the short charge issue from the battery one and the weight/over powered issue from the petrol one. With a money off voucher from Machine Mart at £120 this is a bargain as I can run drills and saws down the farm if needed as well. The £20 off voucher was what finally sold it. It's also quieter and cheaper to run than the petrol strimmer. 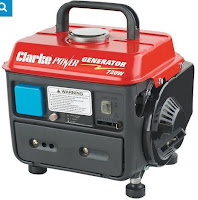 Hopefully as the season picks up we'll get the plot under control again and find more time for writing., but for now............

Hi there. This is the first time I've read your blog and really enjoyed the tour around your growing area. Interesting you are growing purple orach… one of our plot neighbours grows this and says it is very tasty, plus she lets it self seed, so plant free forever!!

Glad you liked it, always nice to hear from a new reader.

We haven't tried eating it yet, but I think its a really good looking plant. However we didn't grow it to look at so it won't be long..