A little while since the last post, we were away last weekend, the hottest weekend of the year so far. There wasn't much time to water before we went so the return was a nervous moment. Thankfully everything seems to not only have survived, but flourished!

Here's the mid June update, quite a difference in 4 weeks.

The ruined alliums have been replaced by a multitude of squashes including the purchased butternut's. We've divided the squashes between the beds in case there are any more disasters to come. The courgettes are already looking busy with a few fruits each, there's even signs of a marrow.

The roots end of the bed has finally come into it own. At last we have 2 full rows of parsnips and 4 full rows of carrots. The only issue now is that I have to thin the carrots as the first and second sowing have all decided that they would like put in an appearance. This isn't a task I really want to do but despite being station sown they really are too thickly planted now. I'll wait a little longer so the thinnings are big enough to be used rather than wasted.

I'll be following Marks excellent guide HERE to try and avoid the carrot fly issue. I haven't grown them within a mesh cordon this year as it makes wedding difficult, but I have grown resistant varieties mostly. Certainly I'll pop some fleece over them immediately after thinning for a day or so to protect them.

A lot of people like to put carrots with onions and garlic, hoping the smell will confused the carrot fly, mine are next to the fennel so I may give the leaves a brush afterwards as the fairly strong smell might achieve the same, with no onions left I can but hope. 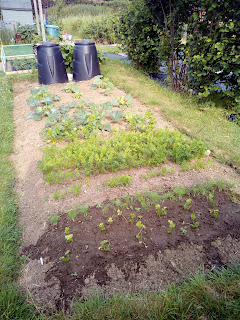 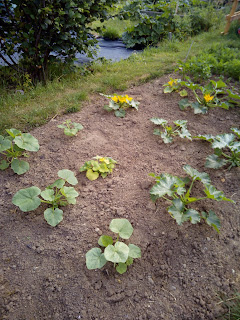 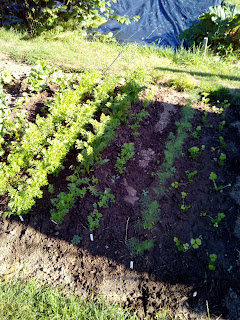 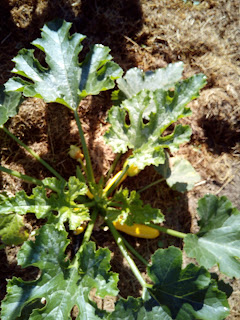 Asparagus season is over. We didn't want to push it this year as we felt the yield was a little bit low. If we stop now the crowns will get a good charge for next year. I have a new frame to go round the bed then I'll compost it, feed it and leave it to grow.

The spuds are going great guns, there are lots of flowers on the earlies and some on the mains. I'm tempted to have a dig around the earlies as see what's happening but as they went in late I'll give them another week or so. 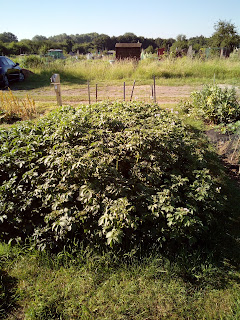 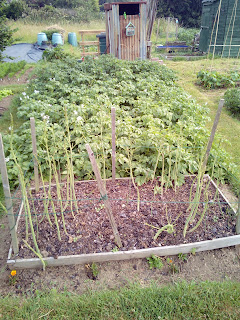 The runner and french beans have stopped sulking are heading skywards, we've had to give them a bit of training and advice on which way to go but they appear to be getting the hang of it now. The runners have a few flowers so fingers crossed this hot weather doesn't stop them setting.

The upside down wigwams mean less ground footprint and the space is being used for lettuces. The Iceburg look pretty happy there.

The dwarf beans didn't have a good germination rate but with a second sowing we have a full row now. we need to mulch these but don't seem to produce the grass clippings quick enough as I have a small back lawn and Heather has concrete!

The peas urgently need weeding but seem to be slowly doing their thing. the second row is ready to have its pigeon protection turning into a growing support now.

Next is a row of mixed courgettes, all looking good. These are planted through weed control fabric as the compost we put in the soil appears to contain rather a lot of tomato seeds...

And finally the battered broads. Seriously it looks like they have been rolled around in. I think it may be time just to pick the lot, freeze or donate them and reuse the ground. I have leeks, more peas and more lettuce to go in there once they come out. 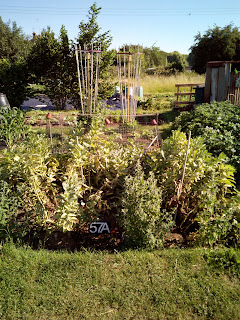 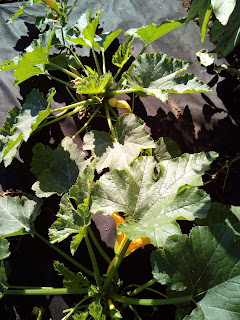 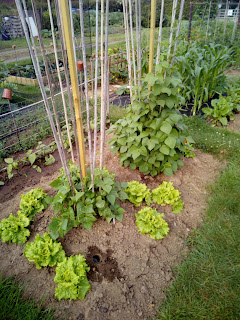 More courgettes with fruit and then a row of cucumbers. I love cucumbers and seem to have got myself a full time job training them up the trellis. There are a few baby cu's appearing now. Hopefully this will be their year as last year wasn't fantastic.

The spaghetti squash were small when they went it and at one point the weed fabric nearly smothered them. I gave them a good feed and now they are really getting going. they seem to be making a bid to join up with the pumpkins.

Hiding at the end, hopefully in a little shade are the  spinach and chard. The first time in ages I've managed to get spinach. The longer cold spell seems to have helped so now we just need to use it before it bolts. 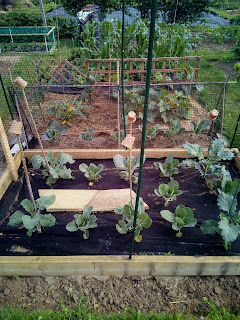 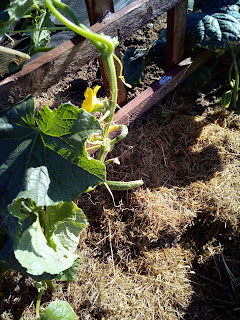 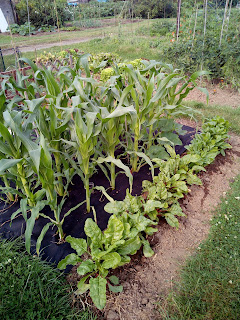 Lettuces are doing really well, the Sierras look impressive when you hand them over and a row of salad bowl is very pretty, we just can't eat it fast enough. I've got a lot more at home to follow on from these but its too hot to transplant them this week.

Beetroot are finally coming good and will need thinning, these have been very slow and a bit of a target for pigeons this year. Hopefully we'll be picking them soon.

Radishes have pretty much stopped. They come up, then they seem to stop. I put it down to the heat as they are well watered. When it was cooler they did far better.

The cape gooseberries and tomatoes all seem healthy. There are baby toms on most of the plants now so the feeding has started. I've be religiously nipping out side shoots and tieing them to the cane to keep them tidy and once we get to  4 trusses I'll nip out the tops. Just the blight to beat!

And finally the fruits. The strawberries are cropping, all be it very small fruits. We will chop off the runners as we want the energy to go into bigger berries rather than new plants. I think this is more their recovery year, if next year is no better we will replace them. The raspberries which were given a major haircut last year look like they will actually produce some fruit this year. There are small flowers appearing so we'll see. 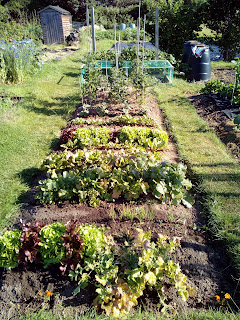 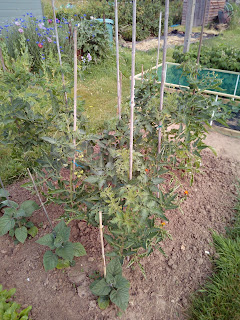 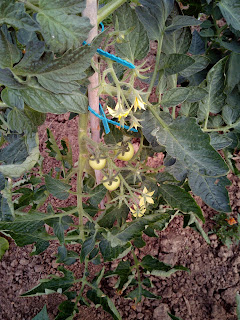 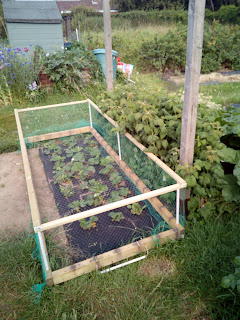 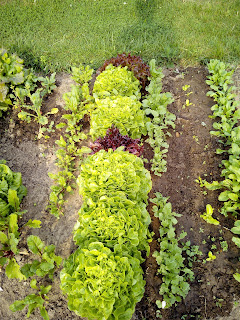 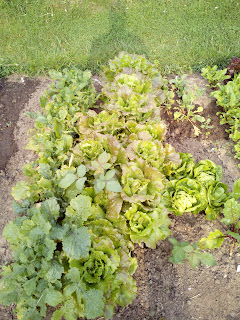 Lots of pics this time, its looking busy down on the farm and I couldn't decide which ones to use, so I posted them all.

Lots of happy looking veg there. (My sweetcorn is about 3 inches)

Runner beans often need a settling in period. WE cover our carrot bed with enviromesh as soon as the seeds are sown and only duck under it if absolutely necessary.

As for the strawberries, our fruits are small this year and I wonder whether the very dry conditions are to blame

Hi Sue. They are like sulky children....lol I hope the carrot/fennel plan works, I found the fleece type thing a pain. I may build some kind of frame I can just lift off quickly, we'll see.

Hi Mal. It took 58 seeds to end up with 23 plants so they weren't easy. They look nice and strong now seem to have survived gales. Plenty of time yet.

We just lay the mesh over the bed, no frames. The plants just push it up as they grown.