Overwintering Thai basil, will it work?

I love cooking with fresh herbs! The rooftop garden has some basic ones that I've had for years like mint, oregano, rosemary and thyme. My lavender is lovely in the spring too; the bees like its purple flowers.

I mentioned on an earlier post that I haven't brought some of my containers inside for winter due to concerns about the plants being toxic for the cat.

The only plant that I have been able to bring indoors is my Thai basil as basil is non-toxic for cats.

This was one that I started from seed in early June: 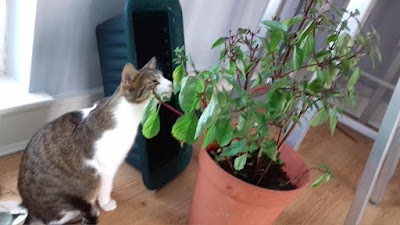 I wouldn't bother if it was 'regular,' i.e. Mediterranean basil. According to internet research, Thai basil is a perennial in the warmer climates of Thailand. In prior years I've left my plants out and they won't survive the cold temperatures. It does have a much tougher stem than Mediterranean basil.

I am a 'try and see if it works' type of gardener.

I brought it in six weeks ago. The wisdom I gathered from the internet was to continue to cut off the flowers to ensure that it doesn't think its growing cycle is done. Sure enough, once per week I cut off the new flowers and it is continuing to make new leaves.

It does have quite a scent though when I trim it, so maybe not one to have indoors if you're don't like strong smells although I don't notice it after an hour.

This was immediately after trimming it, kitty boy will give it a sniff but otherwise he's leaving it alone. As he is curious and gets into anything and everything we might stand half a chance on this one!
Posted by Rooftop Gardener at Wednesday, November 14, 2018

I've never grown thai basil - is it used as normal basil. I've frozen some fresh basil to use over winter.

It is indeed used as normal basil but in Thai dishes like stir fries or green curries. It has a stronger flavor than normal basil, some compare it to aniseed.

I have also frozen some of my regular basil, will be nice with pasta over winter. :)